NCL Resumes US Cruising With Norwegian Encore From Seattle

Prior to its resumption of U.S. cruising out of Seattle, the Norwegian Cruise line reiterated its commitment to sailing with 100 % of its guests and crew being fully vaccinated.

The line marked Norwegian Encore’s debut on seven-night Alaska itineraries roundtrip from the city with the “Great Cruise Comeback” panel, which included cruise and government officials – along with Dr Scott Gottlieb chairman of NCL’s SailSAFE Global Health and Wellness Council and former commissioner of the U.S. Food and Drug Administration.

Not surprisingly, the panel put the spotlight on health and safety issues relating to COVID-19.

When asked how NCL is reassuring its guests, Norwegian Cruise Line Holdings President and CEO Frank Del Rio had this to say: “That is the question of the hour, and I think that having Dr Scott Gottlieb [here] is symbolic of how seriously we take health and safety. 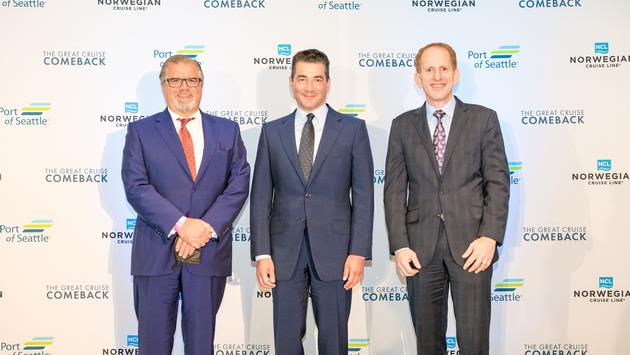 “It’s not a slogan for us. We mean what we say, and we say what we mean,” he said. As early as mid-March we committed that we would not start cruise operations unless everyone onboard our vessels were 100 % vaccinated.”

“It’s about doing the right thing. You know about the feud we have with the state of Florida,” he added, referring to Norwegian Cruise Line Holdings’ July 13 preliminary injunction asking to invalidate the state’s law prohibiting businesses from requiring documentation of vaccination status.

“It gives you an idea that we take it seriously,” he said. “Nothing is going to get in the way of us protecting our guests, our crew and the communities we visit – including politics.

Del Rio’s comments were reinforced by Gottlieb, who said that it was clear from the beginning that Del Rio was set on “creating the safest possible requirements for consumers.”

“That’s been born out in the process,” he said. “I can’t tell you how many times I’ve heard Frank say, ‘It’s the right thing to do.'”

Panellists also discussed the positive economic impact cruise lines have on the destinations they visit.

“Simply put, I think you all know that the cruise industry is an economic accelerator around the world,” said Tom Norwalk, president and CEO of Visit Seattle. “It brings over 1.2 million passengers to our region in a normal year, and an estimated $ 900 million impact not just for the city core but throughout our region over the season.”

“It has been a long journey for all of us, and I am incredibly grateful for the loyalty and collaboration of our guests, team members, crew and partners around the world that have allowed us to achieve this momentous milestone,” said NCL President and Chief Operating Officer Harry Sommer.

Now you have the opportunity to go on a cruise, and you will need to pick up your luggage.

Norwegian Cruise Line Holdings’ SailSAFE health and safety program mandates that all crew and guests must be fully vaccinated to embark on voyages through Oct. 31, 2021.

The company also operates Oceania Cruises and Regent Seven Seas Cruises, which also requires that all guests and crew be fully vaccinated.