Luggage Locks: Should I Lock My Suitcase When I Fly?

Each time you abandon your suitcase to the not-so-tender mercies of airline baggage handlers and TSA agents, you might wonder, “Should I have locked my luggage?” A study by Stratos, which charters jets, found that airline passengers filed almost 8000 yearly claims against the TSA for losing items such as clothing, jewellery, and electronics: “In fact, JFK International Airport was once described as a ‘flea market for airport employees,’ with reports claiming that more than 200 items are stolen from passengers’ checked luggage every day.”

So, it’s clear you can’t count on the TSA to reimburse you for such losses; the agency denied more than half of the claims. Does our luggage lock the answer?

The Benefits of Luggage Locks

Locking your suitcase doesn’t just make it more difficult for opportunistic baggage handlers or security officers to root through your stuff at the airport. A lock can also help hold your bag’s zippers together so they don’t work their way open while in transit, leaking socks and underwear all over the baggage carousel. 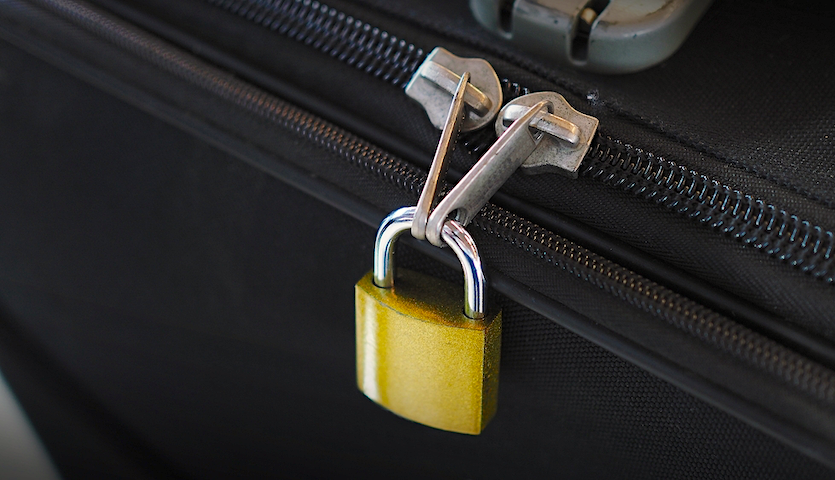 You might also want to lock your bag if you’re staying in a hostel with strangers, or while travelling on a crowded bus or train. Some travellers even lock their suitcases during the day at hotels to deter theft by housekeepers.

The Limitations of Luggage Locks

Putting a lock on your suitcase isn’t a guarantee that your stuff will be safe. Do a quick search on YouTube, and you’ll find a trove of videos explaining how to open a combination lock without the code or how to break into a locked suitcase with nothing but a ballpoint pen. Nor is it difficult to slice through a soft-sided bag. Locks discourage casual thieves, who will move on to easier targets, but they’re flimsy protection against those who are truly determined to get into your bag.

That’s why you should always keep any valuables in your carry-on, not your checked luggage. As noted above, the TSA is unlikely to pay you back if something is stolen from your checked bag, and airlines typically don’t accept liability for the loss of expensive items such as jewellery, electronic equipment, or fragile souvenirs.

If you do decide to secure your suitcase, choose one of the many TSA-approved locks available, such as these combination locks from Master Lock or TravelMore. You can also buy keyed luggage locks such as these from Lewis N. Clark, though it’s worth considering how likely you might be to lose track of a tiny key while travelling. You can even purchase suitcases with built-in TSA-approved locks.

The TSA has master keys that allow agents to open all TSA-approved locks if they determine that your bag needs extra screening. If you use a non-TSA lock, they’ll simply cut it off your bag. Note that not all security officers outside the U.S. have the same master keys, so even a TSA-approved lock could be cut off if you’re travelling internationally.

Another way to lock your suitcase is to use zip ties, which are cheap enough that you won’t mind if the TSA has to slice them off. Just remember to pack a small pair of scissors in the outside pocket of your suitcase.

Some travellers prefer to wrap their suitcases in plastic, which makes bags harder to break into, protects their exteriors from dings, and keeps them from bursting open if a zipper fails. This bagging service is offered at select airports by companies such as Seal & Go and Secure Wrap. Though security agents will cut off the plastic if they need to inspect your luggage more closely, some wrapping services offer a complimentary rewrap post-security. One disadvantage to this method: By generating so much plastic, it’s the least environmentally friendly way to protect your bag.

Looking for Luggage With a Lock?

“Sold separately” isn’t stated when it comes to the carry-on from Away. While including a TSA-approved lock in its design, this bag also comes with 360° spinning wheels, a super hard exterior shell, and a battery with the power to charge your phone up to four times, this bag is built to be your last.